The solution to the hard water problem is to get rid of the calcium and magnesium. While there are chemical treatments that do this, we believe that the healthiest and best method is installation of a water softener.

A water softener is a mechanical appliance that’s plumbed into your home’s water supply system. Softeners trade the damaging minerals for sodium ions. The process is called ion

The heart of a water softener is a mineral tank. It’s filled with small polystyrene beads, also known as resin. The beads carry a negative charge. 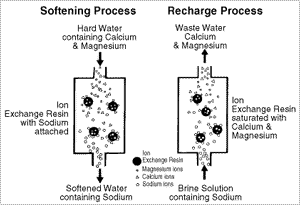 that cause water hardness can be removed fairly easily by using this ion exchange procedure. Water softeners are exchange devices. Exchange involves the replacement of the hardness ions with non-hardness ions. Water softeners use sodium (Na+) as the exchange ion. Sodium ions are supplied from dissolved sodium chloride salt, also called brine. In the ion exchange process, sodium ions are used to coat an exchange medium in the softener. The exchange medium is made of resin beads that resemble wet sand. 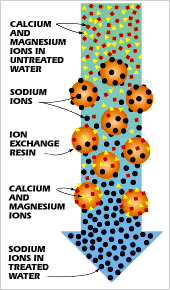 Maintenance of water softeners is largely confined to restocking the salt supply for the brine solution. The brine tank may require periodic cleaning. The frequency of cleaning depends on the amount and purity of the salt used in the softening process. The brine valve and float assembly should also be checked and cleaned as often as needed.